Tonal sounds refer to the highs and lows of a sound that appears in a syllable or in a word that can change the meaning of a word and is a soundtrack of other sounds that cannot be alone. There are 5 tonal sound units in the Thai language. 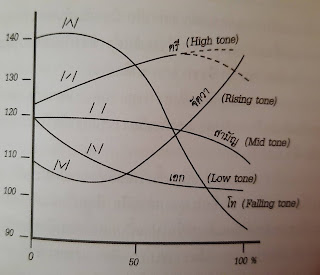 1. / / The Middle level tonal (Mid tone) means the tonal tone that has a beginning from the middle level and gradually changes to a lower level corresponding to the ordinary tonal tone in the Thai language such as Maa, Pai.

3. / ̂ / The Falling tonal (Falling tone) means the tonal changing from high to low, meaning there is a rather high starting point. Change a high level and then lower to a lower level Matches the tonal tone in the Thai language.

4. /  ́/ The High-level tonal (High tone) means a tonal with a high starting point. Matches the tonal tone in the Thai language.

5. /  ̌/ The Rising tonal (Rising tone)  means the tonal changes from low to high, meaning there is a relatively low starting point in the middle. Change the level down and then rise to the middle level, rather high or high level. Matches the tonal tones rising in the Thai language.


Format of Thai tone marks have 4 symbols as under

Remember, These tone marks are used to stand above the consonants and have a different tone of each word.

Types of Nouns in Thai        Nouns are words that are names for people, animals, things, and general behavior. It is divided into 5 types...

Sandy_Huang
Hi! Everyone, My name is Sandy and was born in Thailand. My objectivity is assisting many foreigners who intend to learn Thai. Please follow me such as click follow that a blue button at the bottom of this column. Keep learning Thai.